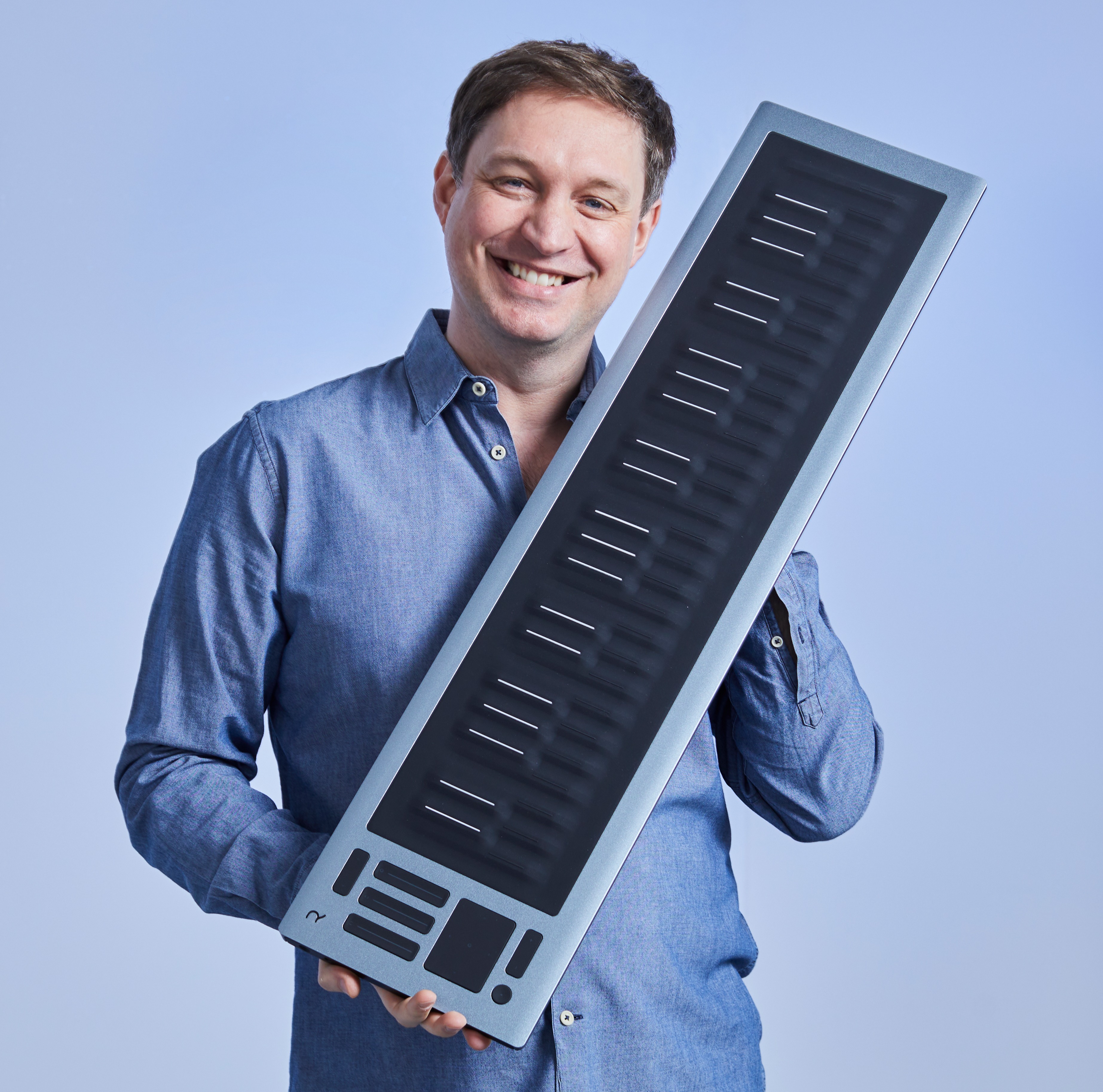 Roland Lamb, inventor of the Seaboard and CEO of Luminary ROLI, with Seaboard RISE 2.

Today marks a major milestone in our journey with the Seaboard.

We have been working on the Seaboard now for more than ten years. Today we are doing something new. It’s the first time we are launching a second-generation Seaboard — Seaboard RISE 2 — and the release of this refined and reimagined version is a milestone in the Seaboard’s journey to becoming the newest member in the select family of musical instruments.

The world of musical instruments consists of a relatively small set of instrumental modes, i.e. string, wind, percussion. If you were to draw a family tree of instruments, with branches for each gestural, musical language, you would find there are surprisingly few kinds of musical interfaces. For example, brass and wind are really a shared branch of breath instruments.

We believe the Seaboard adds a new limb to this tree, branching out into multiple modes with more types of gestural control than any other instrument in human history. We also believe that musical instruments — one of the most essential forms of human expression — will be transformed by digital technologies. The Seaboard is one of the first and only instruments to start to do this, and the RISE 2 is by far the best Seaboard we’ve ever made. 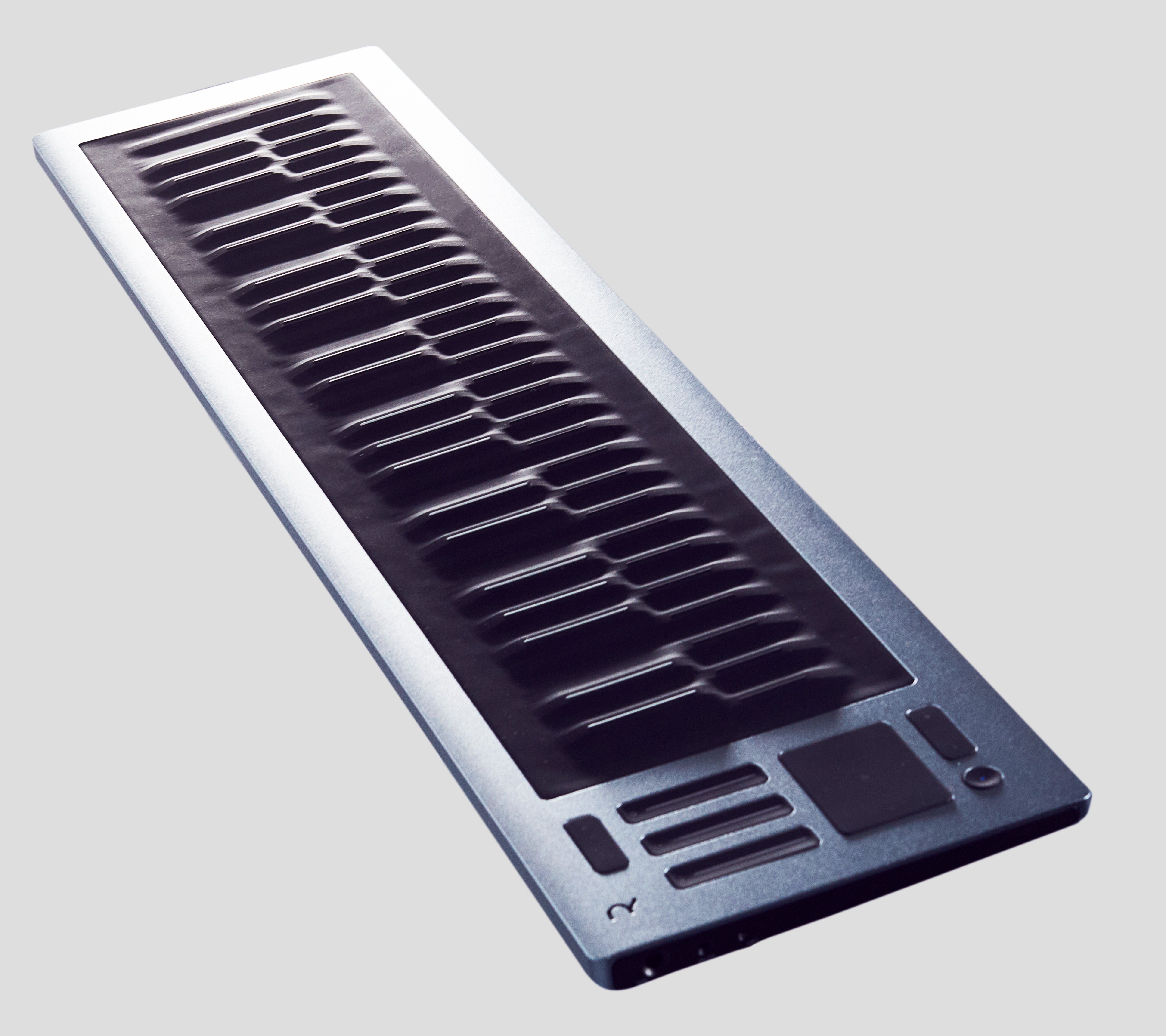 The playing surface of RISE 2 is framed by a stunning platinum blue anodized aluminium chassis.

The Seaboard RISE 2 is easier to play, more durable and more beautiful than any Seaboard we’ve ever designed

Seaboard RISE 2 is the Seaboard I always dreamed of making. While I have loved every iteration of the Seaboard, I also recognize each had their unique strengths.

RISE 2 improves upon our great designs of the past and combines what we’ve learned from nearly 10 years of making Seaboards, and from listening to valuable feedback from the community of Seaboard creators all over the world. It carries forward the refinement of the original Seaboard GRAND, the impeccably engineered format of the Seaboard RISE, and a playing surface beyond even what Seaboard Block was able to achieve.

Instruments should be beautiful. We wanted RISE 2 to look as good as it feels to play, and reflect the care and careful consideration we put into building it. Above all else we wanted the form of RISE 2 to heighten its function. The platinum blue anodized aluminium we chose is distinctive compared to our previous designs. More importantly, this much lighter tone of the anodise contrasts sharply with the jet black play and interface surfaces — so the interactive elements of the Seaboard are now much more visible and easier to use on stage or in a dim studio.

The form factor of the original RISE proved to be the best of the various Seaboards we’ve developed, both in terms of function and design. The 49 key was the best overall size and shape for most users, and the core elements were so well loved that we decided to barely touch them. But after years of experience, we knew exactly what small elements needed to be re-engineered to improve usability, and what superfluous elements could be reduced to improve durability. We’ve added a MIDI Port to maximise compatibility, updated to a more durable USB-C port, and removed what became an unnecessary power port. A number of other wishlist industrial design elements were further fine-tuned to provide unparalleled durability and build quality. 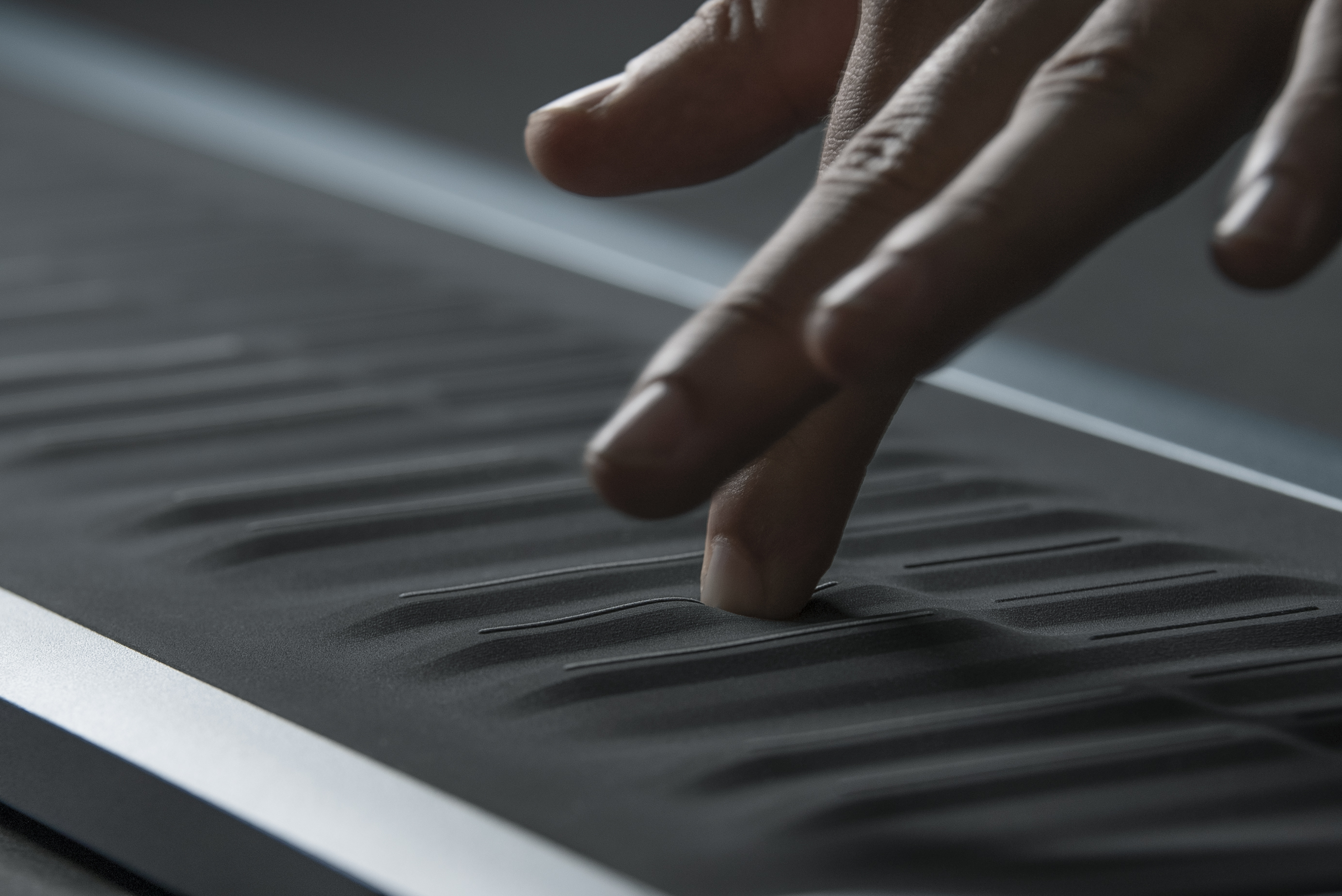 The shape of the Keywave2 and the precision frets radically change the playing experience.

One of the more challenging aspects of playing Seaboard is control of the movement of your fingers across a deeply expressive playing surface. Unlike a piano, it is possible for one's fingers to slip off of the keys, or become disoriented and unintentionally alter pitch. This is something we progressively improved from the GRAND to RISE to Seaboard BLOCK, but our research into the neuroscience of musical performance — particularly the cognitive loop that takes place between fine motor control and tactile perception — led us to identify a design flaw in the Seaboard.

In trying to make the Seaboard continuous, I had initially given it a curved sine wave-like structure. But our research suggested that auditory and visual perception is not fast or accurate enough to track the finger-by-finger micro adjustments that are necessary to play a continuous pitch instrument like the Seaboard in tune across multiple voices. Not only would one’s fingers slip off the keys, one couldn’t easily perceive exactly where on the key one’s finger is touching. You must have a muscle memory trigger to make the required micro-corrections in real time that enable mastery of an instrument. But because the Seaboard offers so many expressive variables (effectively 50 because you can modulate each of your 10 fingers in 5 dimensions), it is even more essential to be able to rely on muscle memory instead of a visual or audio reference of where your fingers are on the Keywaves.

In designing a solution, we took some of the advances we made with the Seaboard Block surface shape and also looked to other branches of the instrument family tree that also have relatively expressive gestural control, especially string instruments where continuous pitched playing creates profound expressiveness but also real challenges associated with playing in tune. The result is Keywave2, and what we feel is the most approachable, easiest to play interface we’ve ever made. It features precision frets, small embossed lines of silicone down the centre of each key which, like a guitar’s fretboard, serve as a motor-sensory guide. We’ve also broadened the surface and articulated the shoulders of each keywave to further improve register.

Collectively, they are subtle changes that lead to an entirely new playing experience. When we shared the new surface with seasoned composer A. R. Rahman, a long time supporter whose advice we trust deeply, noted that when playing he could now just close his eyes, play a solo, and feel it. 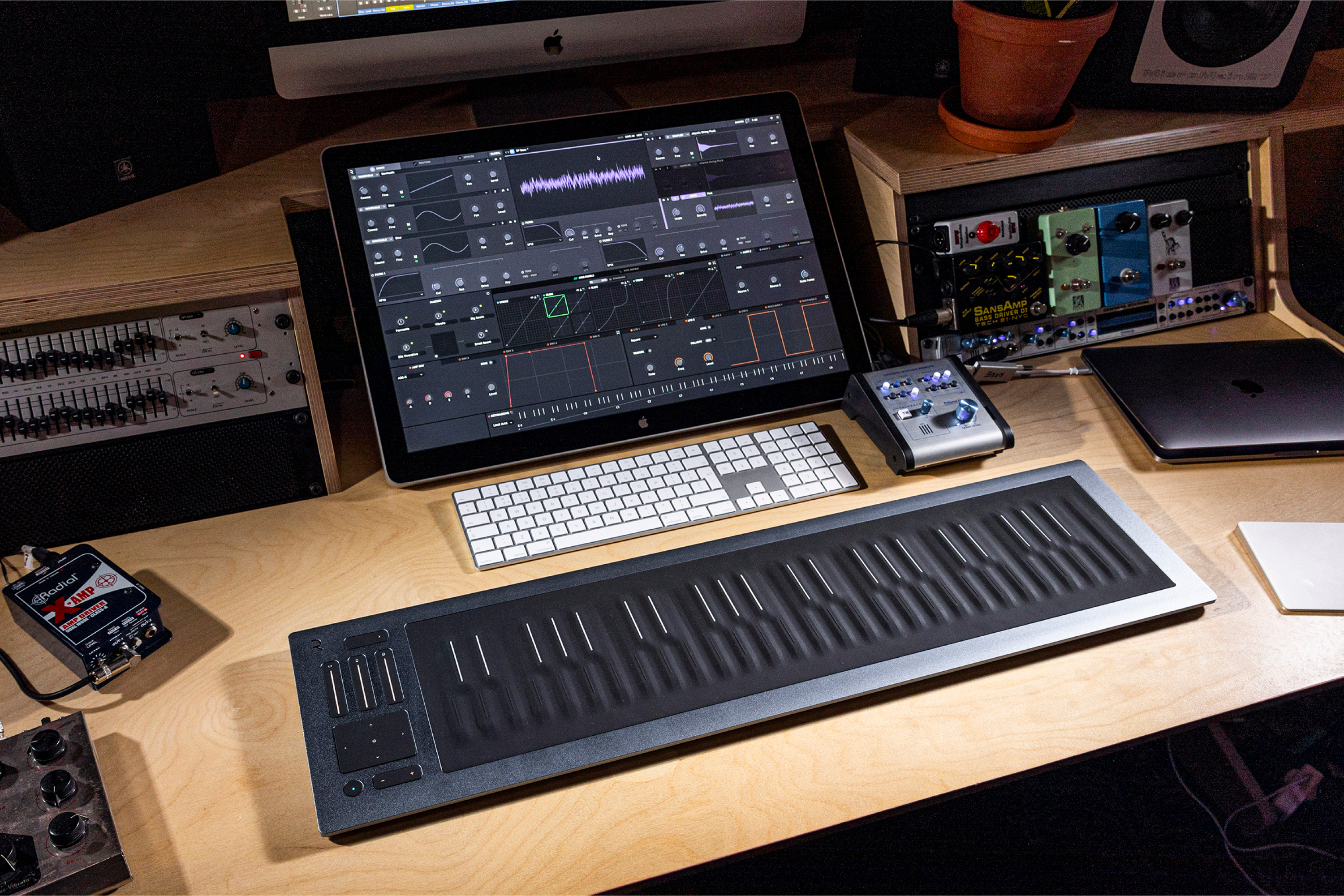 Equator2 and Seaboard RISE 2 were designed in parallel for unparalleled musical expression.

RISE 2 benefits from development in Equator2, the world’s leading MPE synth, and an extraordinary shift across the industry towards a whole ecosystem of compatible sound and software products.

Ten years into its development, Equator — now Equator2 — is a mature and sonically beautiful instrument. It has grown from the budding voice of the Seaboard GRAND to the world’s most powerful hybrid soft synth, and the standard bearer for MPE instruments.

In developing the Seaboard we sought to push the limits of digital expressivity as far as we could, even considering adding further dimensions of touch. But ultimately we found our limiting factor in this pursuit to be software, rather than hardware.

To design multidimensional sound you needed not only a powerful modulation matrix, but you also needed a large variety of independent sound sources. In Equator2 we were able to develop a hybrid engine that has 4 sound engines and 6 independent sound sources that can be layered on top of one another, allowing us to push far beyond the limits that previously restrained us.

We’ve now had time for our approach to MPE sound design to mature, and now have access to a huge library of rich sounds that have earned Equator2 acclaim as the world’s leading MPE synthesiser.

Outside of our own development, there are an ever-increasing number of great MPE instruments out there and most DAWs now support MPE. In practice, this more than anything makes using RISE 2 a much more advanced experience than any Seaboard to date, because so many things just work seamlessly out of the box. 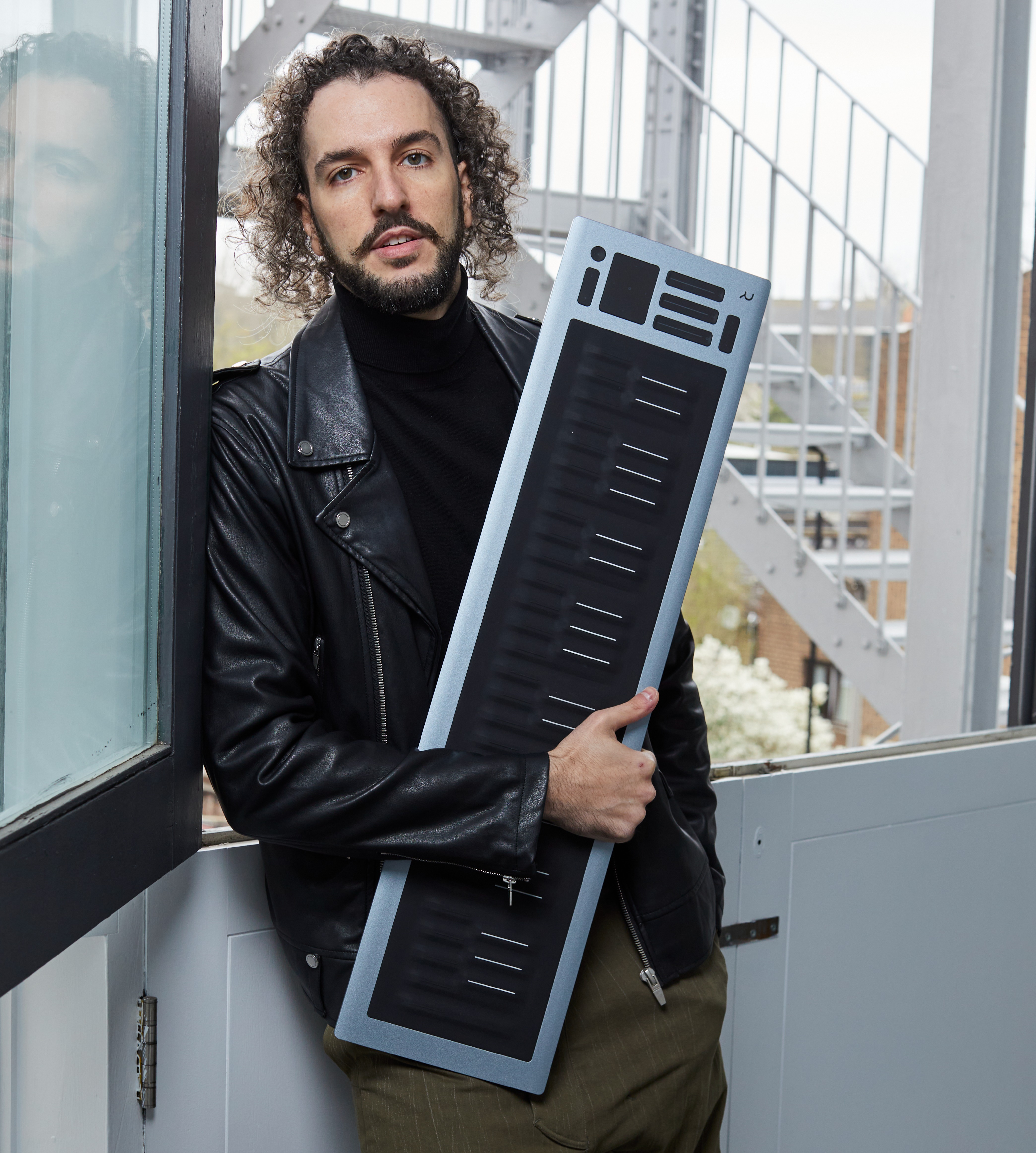 RISE 2 was rigorously tested and refined with the help of pianists and Seaboardists, including Seaboard virtuoso Marco Parisi.

This launch marks the transition of MPE from a fledgling, peripheral project to an established and mature category which in time will become increasingly central to how digital music is made.

In many ways, the Seaboard has already succeeded as an interface, but not yet fully as an instrument. But to my mind, today marks the first time that the Seaboard achieves a level of iteratively engineered refinement and systematic reimagination that places it comfortably within the prototypical family of musical instruments.

And the very fact that the Seaboard RISE 2 now offers a polished end-to-end MPE creation experience, confirms that MPE, as a holistic hardware-software ecosystem, has also arrived. For that, significant credit is due to all the software and hardware contributors in the space; there are some amazing new tools being developed by teams around the world. But the Seaboard RISE 2 is unquestionably the best, in many ways better executed than even any conventional MIDI device.

But that’s just my opinion, and — as I think those of you who have read to the end can’t help but notice — I really love the Seaboard RISE 2 :)